The problem of image registration consists of aligning two images taken from different perspectives in order to obtain a larger visual representation of some large structure. For instance, one can stitch several overlapping aerial pictures to obtain the map of an entire city. Another example is the creation of panoramic pictures, which consists of stitching pictures taken by rotating the camera. The registration problem is also present in the medical fields. It is required to register medical imagery in order to accurately perform diagnostics as well as detect changes during several types of treatments.

With such a broad spectrum of applications, one can expect the registration problem to be presented with countless particularities. The signals being registered can have an arbitrary amount of dimensions; they might not even contain the same representation of the structure being mapped in the first place. The data from an MRI (representing soft tissues) can be registered with CT scans (more sensitive to high density objects); one may also attempt to register satellite imagery with cartographic maps.

The objective of this article is to gently introduce how the registration problem can be addressed with a non-linear optimization framework, from the Taylor series until the formulation of the Homography Jacobian and Hessian. In this article, we will focus on rigid registration, although the concepts herein can also be applied to the non-rigid case.

The image registration problem consists of finding the coefficients

of the coordinate transforming function

Here is the explanation for each element in this formula:

In order to understand the Newton algorithm for non-linear optimization, consider the 1D example function below:

, it seems prudent to first have a practical tool for detecting maxima points in the first place. One such a tool consists of looking for points whose slope is zero:

Since the slope of

is given by its derivative with respect to the parameters being optimized,

, the maxima points can be found as the solution to the following system:

In many practical applications, including the image registration problem, the solution to this system can’t be found analytically. This is where we use Newton’s method for finding roots of differentiable functions.

The idea of Newton’s method for solving

is to iteratively approach the solution

, starting at any initial guess

and skipping to a better point

, which is given by the intersection between the line that is tangent to

and the horizontal axis, as shown in the figure below.

Since this line is tangent to

, its slope must be

. As a line, its equation is given by

. Since it evaluates to

is located at the intersection between this line and

This very same procedure can be repeated to compute an

as its own initial guess, and an

after that. Generalizing, each new point

in the iterative scheme can be determined by

until some convergence criteria is satisfied (for instance, until

, we can finally reach the formulation to each iteration of the Newton’s method for finding a local minimum of

, starting at an arbitrary initial guess

There are a few caveats to this method, though. Notice how the example function

contains both minima and maxima, and the slope of

is zero at all of them. The Newton method may converge to any of these inflection points, so you must check upon convergence whether you’ve reached a maximum or a minimum inflection point by verifying the signal of

is the convergence point. If

, then you’ve reached a local minimum; if

, then you have found a local maximum. If, however,

, then the test is inconclusive and

might not even be either maximum nor minimum! For instance, consider the function

: this inflection point is not interesting at all for our purpose.

In the next section, we will talk about the geometrical interpretation of the Newton method. Before we do so, let’s back up a little and recall the concept of Taylor Series. Assuming that the function

is infinitely differentiable at

, we can write it as an infinite polynomial:

and evaluating them at

Let’s take a moment to contemplate the implications of this concept. It is clear that the Taylor series will represent our arbitrary function

when all of its infinite terms are present. Nevertheless, it is interesting to see what happens in the case when only its first

via a finite polynomial

is only a horizontal line that crosses

, however, something interesting starts to happen. Since in this case

, then we can say that the derivative

has the same value of the derivative

is the tangent of

By using this very same reasoning, we can say that every additional term included in our Taylor series will make

down to an additional derivative. In other words, we can find a polynomial of arbitrary degrees that shall smoothly approximate the original function

Naturally, the real power of the Taylor series comes when it is adapted to perform such approximation at any arbitrary location of the

axis, not just the origin. To achieve this adaptation, we need a polynomial 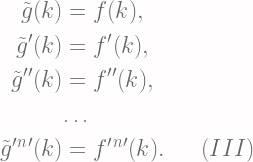 and exploring the relationships in

by computing the n-th derivative of 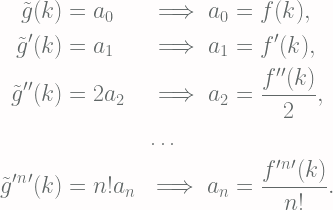 Finally, we have that the polynomial of degree

Geometrical Interpretation of the Newton method

be a function whose minimum (or maximum) we want to find. Also, let

be the initial guess that will be used by the Newton’s method.

, and defining the root of the next iteration

as the inflection point of

which generalizes exactly as shown in equation

There are several ways to adapt the equation

for use with Newton’s method. Note that, due to the iterative nature of this method, we are always seeking to determine an incremental change to the parameters being optimized

, which will bring us closer to the maximum of the image similarity function. The calculation of such incremental change to

involves several extremely computationally expensive tasks, such as calculation of image gradients, Jacobian and Hessian of the transform function (evaluated at each pixel!), and so forth.

Therefore, we need to formulate our iterative scheme carefully to avoid as much calculations as possible. Below, I briefly introduce the most common ways to perform this task.

The forward additive formulation is possibly the simplest approach, and combines the classical formulation of Newton’s method with the most basic Taylor series formulation, which approximates the function at the origin (that is, at

-th iteration, the origin of the similarity function is re-centered at

Note that the warp function is now expressed as

is the variable, and

is a constant. Therefore, the Taylor series of the image similarity function expanded at

will approximate it at

At each iteration, we will find a

that brings us closer to the desired maximum, and then we find

By using this formulation, we usually end up having to calculate some very convoluted Jacobian and Hessian matrices for the transform function

. The Forward compositional formulation was proposed to simplify this procedure a little bit.

in order to reach

In order to be able to use this formulation, the image similarity function must be also reformulated:

(which are required for the Taylor series expansion, as described previously), you will eventually have to evaluate the Jacobian and Hessian matrices of

The problem with the previous formulations is that, when computing the first and second derivatives of

, we usually end up with formulas that depend on

is updated at each iteration, we end up having to recompute all terms that depend on it as well.

, so depending on the similarity function, we end up being able to precompute a large amount of matrices:

This adaptation requires the update step to also be reconsidered. Since

now describes a transform that brings

, we need to adjust the update step in order to find

This can be done as follows. We know that applying

must be equivalent to applying

To visualize this, compare the before and after a step of the Newton’s method. The point

corresponds to the optimum of the parabola that passes through

and can be reached via a step of

. To determine how this step is applied, let’s replace

in the left side of equation

Now compare the result of equation

with the right side of equation

and we see that the update step can now be written as:

I’ve only barely scratched the surface on the topic of formulations to the image registration problem. Each one of them have their own requirements in terms of what types of transform functions

are supported. If these requirements are met, they are all proven to be equivalent. The curious reader is invited to read the paper Lucas-Kanade 20 Years On: A Unifying Framework, by S. Baker and I. Matthews.

At this point, some concepts evoked in that paper may still sound like black magic to the reader, especially those who have not studied the fields of real analysis. For now, the most important are the requirements for the transform

This was the first post of a series about how to solve the image tracking problem via a non-linear optimization framework. In this post, I introduced the general idea of the iterative Newton’s method and briefly talked about how an arbitrary image similarity function can be adapted to be used with this framework. In the next post, I’ll dive into the details of one example, using the inverse compositional formulation combined with the Mutual Information similarity function.

It is clear that the Newton’s method is sensitive to the initial guess provided to it. Depending on the value provided to

, there is always a risk of convergence to local maxima of the image similarity function. There are several ways to overcome these obstacles: For instance, one can use a robust estimator such as a keypoint based registration to determine

. Furthermore, it is possible to perform the tracking algorithm in several scales of the input images, from the coarser to the finest, using the output of one scale as the input to the next scale. This has been shown in the literature to vastly improve both the convergence region as well as the convergence rate of the iterative algorithms.

Nevertheless, depending on how you model your solution, there are probably better methods than Newton’s out there, such as Gauss-Newton and Levenberg-Marquardt.  The Lucas-Kanade modelling of the image registration problem has been shown to work much better using these algorithms.